Capable of printing parts in minutes rather than hours, the MIT-developed 3D printer device could make additive more viable for mainstream production

For many applications, the biggest drawback to additive manufacturing (3D printing) is its speed. Objects the size of a Lego brick can take hours to produce, which is too long to wait in modern manufacturing. The new printer, developed by MIT’s Laboratory for Manufacturing And Productivity, has an innovative printing head designed to bypass the main rate-limiting roadblocks in conventional additive manufacturing hardware.

Sponsored by Lockheed Martin, project leader Anastasios John Hart, director of the lab, analysed existing desktop 3D printers that use polymer extrusion as their printing method, and determined that there were three factors that limited their speed: how fast the printer can move its printhead; how much force it can apply to push its printing material through a nozzle; and how quickly it can transfer heat to make the material flow.

“Every year now, hundreds of thousands of desktop printers that use this process are sold around the world,” Hart said. However, on average, these printers can only print at a rate of 20cm³ per hour. “That’s really slow,” Hart added.

The new printer, which Hart developed with former graduate student Jamison Go, incorporate three speed-enhancing components: a screw mechanism, which feeds material through a nozzle at high force replacing the conventional feed system which uses two small wheels to advance the filament to the tip of the nozzle.

“Using this screw mechanism, we have a lot more contact area with the threaded texture on the filament,” Hart explained. “Therefore we can get a much higher driving force, easily 10 times greater force.” 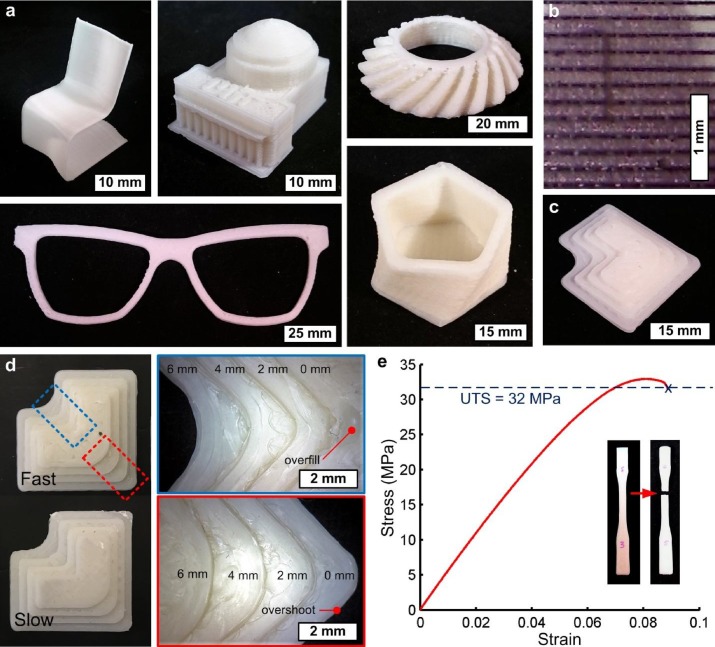 They also built a laser into the printhead, to rapidly heat and melt the polymer, allowing it to flow through the nozzle faster; and mounted the printhead, about the size of the computer mouse, on a fast-moving twin-servo driven parallel gantry. The researchers describe this new system, which they call FastFFF (fused filament fabrication), in a paper in the journal Additive Manufacturing.

The prototype of their system can print polymer fast as 127cm³ per hour, with resolution comparable to conventional desktop printers. Its maximum print rate (albeit at reduced resolution) is 282cm³ per hour, 14 times faster than the benchmark. To test the system Hart and Go printed a variety of objects, including small glasses frames, bevel gears and a miniature replica of the MIT dome, each taking five to 10 minutes from start to finish.

“If I can get a prototype part, maybe a bracket or a gear, in five to 10 minutes rather than an hour, or a bigger part over my lunch break rather than the next day, I can engineer, build, and test faster,” said Hart. “If I’m a repair technician and I could have a fast 3D printer in my vehicle, I could 3D-print a repair part on-demand after I figure out what’s broken. I don’t have to go to a warehouse and take it out of inventory.”

Hart believes that the new technology would be particularly valuable for applications in emergency medicine and in remote locations.

Bonus: Here is the academic paper if you are interested:

See the 3D printer system operating at real speed in this video: