If you’re in the front line, in the danger zone, ducking bullets from all directions, you need all the help you can get. No-one can move fast enough to dodge a sniper’s bullet, when they can’t even see it coming. There’s only one way to protect yourself: place a barrier in front of your body that will dissipate a bullet’s energy. That’s the basic idea behind bulletproof glass. Let’s take a look at how it works!

“Bulletproof” glass is very different to ordinary glass. More correctly called bullet-resistant glass (because no glass is totally bulletproof), it’s made from multiple layers of tough glass with “interlayers” of various plastics. Sometimes, there’s a final inner layer of polycarbonate (a tough type of plastic) or plastic film to prevent “spalling” (where dangerous shards of glass or plastic splinter off following the impact of a bullet). This sandwich of layers is called a laminate. It can be up to ten times thicker than a single pane of ordinary glass and it’s usually very heavy. 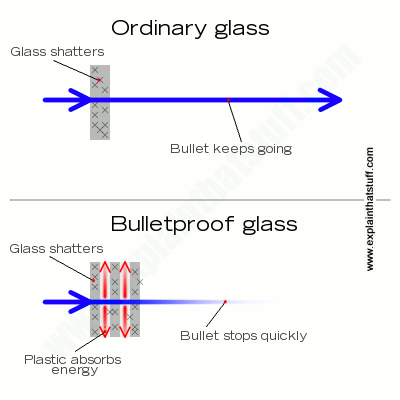 Bullet-resistant materials are tested using a gun to fire a projectile from a set distance into the material, in a specific pattern. Levels of protection are based on the ability of the target to stop a specific type of projectile traveling at a specific speed. Experiments suggest that polycarbonate fails at lower velocities with regular shaped projectiles compared to irregular ones (like fragments), meaning that testing with regular shaped projectiles gives a conservative estimate of its resistance. When projectiles do not penetrate, the depth of the dent left by the impact can be measured and related to the projectile’s velocity and thickness of the material. Some researchers have developed mathematical models based on results of this kind of testing to help them design bulletproof glass to resist specific anticipated threats.

Well known standards for categorizing ballistic resistance include the following: 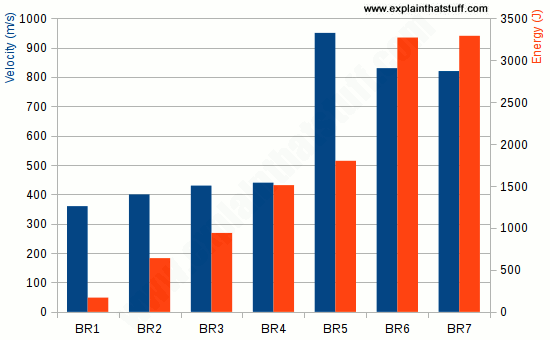 Different standards exist in different parts of the world. In the United States, the effectiveness of bulletproof glass is typically compared using NIJ (National Institute of Justice) Standard 0108 for Ballistic Resistant Protective Materials (September 1985), which lists seven kinds of armor broken into five main types (Types I, II-A, II, III-A, III, IV, and Special). The highest classification, Type IV, must be able to cope with a single hit from a 30-caliber armor piercing rifle with a bullet mass of 10.8g and measured velocity of 868±15m/s. In the UK, the relevant British Standard is BS EN 1063:2000, which compares nine different types of glass (BR1 for handguns and rifles, BR2–4 for handguns, BR5–7 for rifles; and SG1–2 for shotguns). Elsewhere in Europe, that’s equivalent to CEN 1063.

You can see the slow motion behaviour of the bulletproof glass below.

The Manufacturing Journey of iPhone