In terms of sheer speed and precision, delta robots are some of the most impressive to watch. They’re also some of the most useful, for the same reasons—you can see them doing pick-and-place tasks in factories of all kinds, far faster than humans can. The delta robots that we’re familiar with are mostly designed as human-replacement devices, but as it turns out, scaling them down makes them even more impressive. In Robert Wood’s Microrobotics Lab at Harvard, researcher Hayley McClintock has designed one of the tiniest delta robots ever. Called milliDelta, it may be small, but it’s one of the fastest moving and most precise robots we’ve ever seen.

Harvard’s milliDelta is a millimeter-scale delta robot based on origami-inspired engineering that can reach velocities of 0.45 m/s and accelerations of 215 m/s².

Delta robots have two things about them that are particularly clever. The first one is that despite the highly dynamic nature of a delta robot, its motors are stationary. Most robot arms are made up of a series of rigid links and joints with motors in them, which is fine, except that it makes the arm itself very heavy. Moving all the motors to the base of the robot instead means that there’s way less mass that you have to move around, which is how delta robots can, in general, accelerate so rapidly and move so precisely. The second clever thing is that the end-effector of a delta robot—the bit where the arms come together—can stay parallel to the work surface (delta robots are a type of parallel robot). This makes delta robots ideal for pick-and-place operations, since they maintain the orientation of the thing you’re picking up. 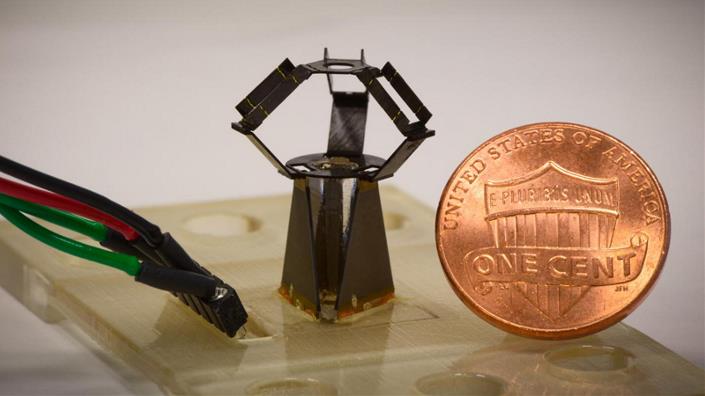 The milliDelta robot was developed by a team at Harvard’s Wyss Institute for Biologically Inspired Engineering. It is a miniaturised version of the Delta robots which are employed in many industrial processes, and use three individually controlled arms to move fast and accurately in three directions. Researchers at the Wyss Institute overcame this challenge by using high-performance composite materials which incorporate joints and bending actuators. They combined this with an origami-inspired manufacturing technique where the robots can be assembled from flat sheets of composite materials. Their robot is just 15 x 15 x 20 millimetres.

“The physics of scaling told us that bringing down the size of Delta robots would increase their speed and acceleration, and pop-up MEMS manufacturing with its ability to use any material or combination of materials seemed an ideal way to attack this problem,” said group leader Robert Wood. “This approach also allowed us to rapidly go through a number of iterations that led us to the final milliDelta.”

MilliDelta is driven by piezoelectric actuators, which bend when you apply a voltage through them. The rest of the robot has been designed for monolithic fabrication; each piece is made of a sandwich of carbon fibre for the structural elements, Kapton film for the flextures, and some sheets of heat- and pressure-activated adhesive. Once assembled, the sandwiches were laser-micromachined into the right shapes and then assembled with the aid of a jig, although the researchers say that a pop-up approach to fabrication could be used to help automate the assembly process to make it easier and more consistent. As far as what you could actually do with this scary little thing, there’s a bunch of possibilities. Obviously, small pick-and-place tasks, like placing components on circuit boards at high speeds, would benefit from milliDelta. So would micro-factory applications, assembling small robots (like more milliDeltas, even). One less obvious but very compelling use-case for milli. Delta is assisting humans in delicate microsurgery—the robot is fast enough that it can compensate for the natural tremors that surgeons experience, which could make things like eye surgery less risky.

Can Robots Assemble an IKEA Chair?

Energy Harvesting from the Human Knee

Biomimicry used to help drones navigate in the dark, dust or smoke