Anyone who has bought an iPod, iPhone, or other Apple product has seen the note on the company’s packaging that its products are designed in California. But that doesn’t mean they’re manufactured there. Answering the question of where the iPhone is made isn’t simple. Manufacturing is the process of making the components that go into the iPhone. While Apple designs and sells the iPhone, it doesn’t manufacture its components. Instead, Apple uses on manufacturers from around the world to deliver individual parts. The manufacturers specialize in particular items—camera specialists manufacture the lens and camera assembly, screen specialists build the display, etc.

Apple buys many of the components for iPhones — like the memory chip, the modem, the camera module, the microphone and the touch-screen controller — from more than 200 suppliers around the world. The components manufactured by those companies all around the world are ultimately sent to just two companies to assemble into iPods, iPhones, and iPads. Those companies are Foxconn and Pegatron, both of which are based in Taiwan.

Basically, most of the process of manufacturing an iPhone consists of buying the products from manufacturers and assembling them in proper factories. Nevertheless, the case of iPhone itself and further improvements on it contain a lot of engineering manufacturing methods. In this post, we would like to describe and demonstrate the details of iPhone mobile phone manufacturing process.

As a base material, Apple has been using 6000-7000 Aluminium series metal for the iPhone models for a long while. 6000 series aluminium contains added manganese and silicon. This combination of elements allows the alloy to be solution heat treated which improves the alloys strength. 7000 series aluminium is alloyed with zinc and can be precipitation hardened to provide the highest strength of all commercially available aluminium’s. Thanks to the oxide layer of aluminium,  the case has a strengthened body and corrosion resistance with having good looking.

However, in the model of iPhone X, stainless steel took the place of the aluminium body that has been using since iPhone 4.

After selecting the proper metal for the body of iPhone, the process follows the machining operations. As seen in the iPhone 7 and iPhone 5 production videos, starting with aluminium they finish all the surfaces with milling process. Diamond tools are used to create a shiny finish on the edges of iPhones. In order to give a sculptured effect to the product and a good harmony with the gorilla glass, the milling process is carried out precisely.

Apple launched its new iPhone 7 in September by holding a media event that highlighted its aluminium finish, and it also spoke of a new “rotational 3D polishing” technique. The new jet black finish is accomplished through an innovative nine-step process of anodization and polish for a uniform, glossy finish, Apple says in a news release. “An entirely re-engineered enclosure results in a water-resistant iPhone offering protection like never before against spills, splashes and dust.” 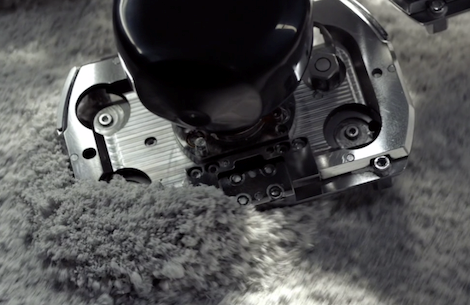 Foxconn’s facilities in Zhengzhou cover 2.2 square miles and can employ up to 350,000 workers, many of whom earn about $1.90 an hour. The operation does what is called F.A.T.P., or final assembly, testing and packaging.

There are 94 production lines at the Zhengzhou manufacturing site, and it takes about 400 steps to assemble the iPhone, including polishing, soldering, drilling and fitting screws. The facility can produce 500,000 iPhones a day, or roughly 350 a minute.

After the iPhone rolls off the assembly line, it is placed in a sleek white fiberboard box, wrapped and put on a wooden pallet, and then wheeled out to waiting trucks.

iPhones bound for the United States and other parts of the world leave customs by truck and are transported three miles to the Zhengzhou airport. The airport has been significantly expanded in recent years, as the production of the iPhone has increased.

Some years ago, personal computers that were made in China were transported to the United States by container ship, with a trip lasting about a month. Smartphones are small enough to be shipped by plane in huge quantities — and cost-effectively. A single wide-body Boeing 747 can easily carry 150,000 iPhones tucked into its aluminium canisters.

This Electric Bike Can Be Folded to Fit Beneath a Desk