In general terms, AI refers to a broad field of science encompassing not only computer science but also psychology, philosophy, linguistics and other areas. AI is concerned with getting computers to do tasks that would normally require human intelligence. Having said that, there are many points of view on AI and many definitions exist. Below we’ll list some definitions of that highlight its key characteristics.

To understand the basics of AI, we can have a look at Google’s AI-Powered Predictions for Maps;

Using anonymized location data from smartphones, Google Maps (Maps) can analyze the speed of movement of traffic at any given time. And, with its acquisition of crowdsourced traffic app Waze in 2013, Maps can more easily incorporate user-reported traffic incidents like construction and accidents. Access to vast amounts of data being fed to its proprietary algorithms means Maps can reduce commutes by suggesting the fastest routes to and from work.

A chess computer could beat a human in playing chess, but that same computer program couldn’t solve a complex math problem. Virtually all current AI is narrow, meaning it can only do what it is designed to do. This means that for every problem, a specific algorithm needs to be designed to solve it. Narrow AIs are mostly much better than humans at the task they were made for: for example look at face recognition, chess computers, calculus, translation. The holy grail of AI is a General AI, a single system that can learn and then solve any problem it is presented. This is exactly what humans do: we can specialise in a specific topic, from abstract maths to psychology and from sports to art. We can become experts at all of them. 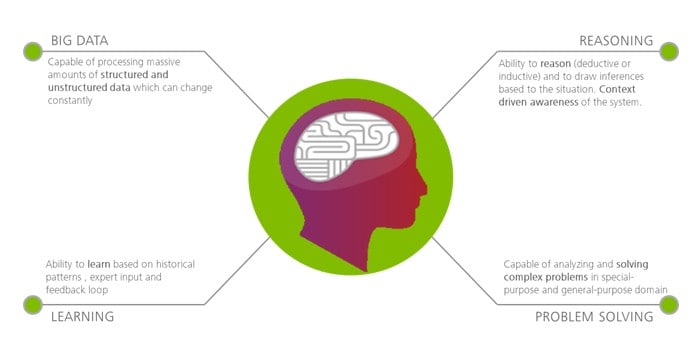 The term artificial intelligence was coined in 1956, but AI has become more popular today thanks to increased data volumes, advanced algorithms, and improvements in computing power and storage.

Early AI research in the 1950s explored topics like problem-solving and symbolic methods. In the 1960s, the US Department of Defense took interest in this type of work and began training computers to mimic basic human reasoning. For example, the Defense Advanced Research Projects Agency (DARPA) completed street mapping projects in the 1970s. And DARPA produced intelligent personal assistants in 2003, long before Siri, Alexa or Cortana were household names.

This early work paved the way for the automation and formal reasoning that we see in computers today, including decision support systems and smart search systems that can be designed to complement and augment human abilities.

While Hollywood movies and science fiction novels depict AI as human-like robots that take over the world, the current evolution of AI technologies isn’t that scary – or quite that smart. Instead, AI has evolved to provide many specific benefits in every industry. Keep reading for modern examples of artificial intelligence in healthcare, retail and more.

Why is AI important?

Here is a nice application from Google that prompts you draw an object and tries to understand what you draw by using previous users examples.

The description from their webpage;

Help teach it by adding your drawings to the world’s largest doodling data set, shared publicly to help with machine learning research.

How does it work: Tesla Electric Car

A Simple Explanation of the Importance of the Vibration Analysis